Ooredoo get the licence on Myanmar

Today Ooredoo announces that it has officially accepted a telecommunications licence to operate in Myanmar.

The Ooredoo Group Chairman and the Ooredoo Myanmar Chief Executive formally accepted the licence at a ceremony in Naypyidaw hosted by the Union Government of the Republic of Myanmar.

Speaking from the ceremony, Ooredoo Group Chairman, His Excellency Sheikh Abdullah Bin Mohammed Bin Saud Al-Thani, said: “It has been an honour to be here today to accept our licence.  We look forward to working in partnership with the government of Myanmar to develop a world class network which brings the benefits of mobile technology to Myanmar’s people.”

The Union Minister Minstry of Communications and Information Technology H. E. U Myat Hein said: “On behalf of the Union Government and of the Ministry of Communications and Information Technology, I would like to express our confidence in as a government in Ooredoo that they will be able to meet their commitments and also contribute to the Union Government’s development objectives. I have seen Ooredoo Myanmar already actively involved in some CSR activities, and I am pleased to acknowledge that you will be taking in quite a significant number of new local recruits and give job opportunities for a large number of Myanmar women besides your other commitments.”

This marks an important milestone for Ooredoo as the company remains on track to meet its commitment to deliver life-enriching mobile communication services for Myanmar’s people in six months’ time.  At launch it is expected that the company’s services will be available in a majority of the major cities, expanding rapidly to include rural areas and more remote communities.

Since its successful bid for a licence Ooredoo has been establishing itself and laying the foundation for its business to become an integral part of the Myanmar community.  In Myanmar, as in operations across its international network, Ooredoo will offer a wide range of mobile communications services to enrich people’s lives that go beyond voice and data to include mobile money services, mobile health, services to support farmers and agriculture and targeted initiatives for women and young people.

Speaking from Myanmar, Ooredoo Group CEO Dr. Nasser Marafih said: “We are delighted to have reached this next important milestone in the development of a world-class telecommunications network in Myanmar.  Ooredoo firmly believes in the transformative power of mobile communications services and we have committed to making next-generation mobile technology available and accessible to as many people as possible in Myanmar.  The Union Government of Myanmar can be proud of a well-run licence process and we look forward to continuing to work alongside them as Myanmar develops socially, economically and technologically.” 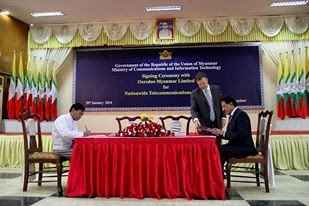 Ooredoo Myanmar CEO Ross Cormack added: “Today is an exciting day for Ooredoo as we move closer to bringing world class mobile services to the people of Myanmar, helping empower communities and people with affordable and easy to access mobile telecommunications.  We are a community focused company and our commitments go beyond the creation of infrastructure. We are working to develop a vibrant communications ecosystem that places Ooredoo at the heart of every community, fostering local entrepreneurial talent, creating jobs for local people and offering opportunities for local businesses."

Ooredoo’s operations in Myanmar are developing rapidly.  In recent months Ooredoo has started building out its 3G network, partnering with industry leaders where necessary to create lasting infrastructure which will support a next-generation telecommunications network.  A network which will be future-proof, meaning that the 3G network infrastructure being developed will be able to comply with technological advancements such as 4G in years to come.