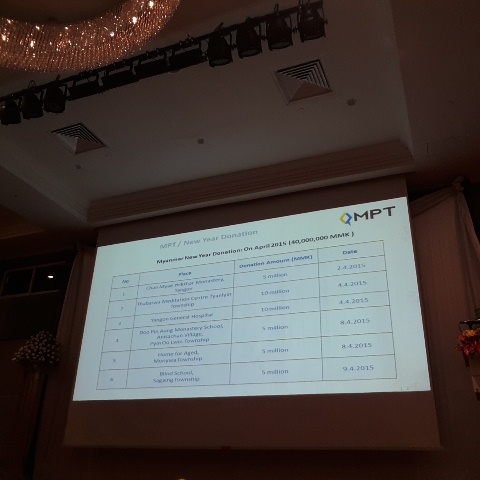 Firstly they would like to share about their CSR works in Myanmar even flooded area. They are donated over 2900 Lakhs to Ministry of relief and social welfare Myanmar. They are also donation to other areas of flood.

And explain about their trying to recover of network BTS on these flooded areas. They want to give good services to customers after the bad condition of disaster. That is the hard works but they can do fix it around 11 BTS until 8 Sep 2015. Actually, 15 BTS are underwater at that time of when  the disaster.
That is work; because of we have good communication after disaster. Isn’t it?

After that, Mr Takashi Shigeno explains to their promotion of “five minutes pay for one hour” program. Everybody is misunderstood about, but we are clear what benefit of this promotion is after he said. Actually you can call to any number of MPT network GSM, WCDMA, CDMA even Fixed line, you must be charge only 5 minutes over of every minute until one hour but you might Swe Thahar. Not need to acceptable side is Swe Thahar. This program allowed every hour and every time but not 6pm to 11pm during.
You give only 5 minute charge, over of only 5 minutes to 15 minutes, 30 minutes, and 45 minutes however until 1 hour.
Thank you everyone, have a nice day.
Moving forward Myanmar MPT